An exhibition wich caused much controversy over the ethical use of live animals in art was Exposición No.1. A show of work by Guillermo Vargas, a Costa Rican artist also known as “Habacuc,” took place on August 16, 2007 at Galería Códice in Managua, Nicaragua. Written in dog food on a gallery wall was the statement, “Eres lo que lees,” meaning, “You are what you read.” The center of attention was a sickly-looking street dog tied to a metal cable bolted to the wall with a short rope. The animal was supposedly captured in the alleys of Managua by some children who were paid by the artist. According to hundreds of blogs and news articles circulating on the Internet, the artist intended for the dog to starve to death during the course of the exhibition. Vargas intended to raise awareness of the public’s hypocrisy by comparing what happened to this dog to a burglar named Natividad Canda Mayrena, who was mauled to death by two rottweilers in Costa Rica while the police and onlookers watched. 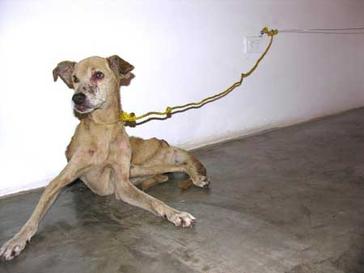